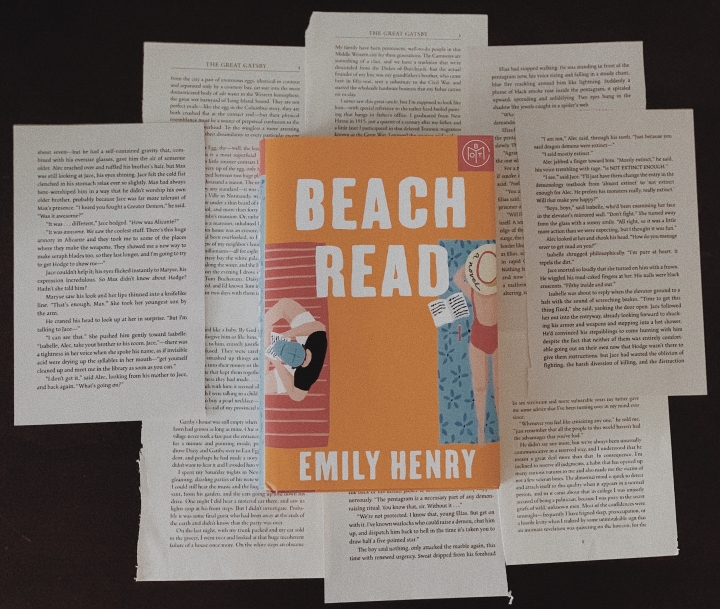 If he was descending into the darkness, I was going to tie a rope between our waists and go down with him.

Oh my goodness, what a story. I don’t even know where to start—the swoon-worthy romance, or the depth of the characters, or the fast-paced plot that gripped me from start to end, or the bantering or… I could go on and on.

Let’s start with the characters’ stories.

First, we have January Andrews. January’s mother had cancer. Survived. Got it again. Survived. January published a book, got a lovely boyfriend, and thought she’d live happily ever after—just like the characters in her novel. But her father died unexpectedly of a stroke, and at his FUNERAL, she is approached by That Woman. That Woman, the one his father had a second house with on a beach. That Woman proceeds to hand January a key to That House, tells her her father would have wanted her to have it, and leaves. January’s boyfriend breaks up with her, January’s mother refuses to talk about her father, and January gets a horrible case of writer’s block. A horrible case of writer’s block that leaves her broke, and the only place she can live rent-free is… you guessed it, That House. And that, dear friends, is where this harrowing story begins.

Then there’s Augustus Everett, who is every bit the love interest. Dark hair, lean, and a crooked smile that makes your heart melt. Oh, and he has a chip on his shoulder. Obviously, I was in love from page one. His character, in my humble opinion, is the deepest character in this book and easily the most relatable. We don’t know much about him upfront, just that he dropped out of high school, dug graves for a living, got his GED, had a college rivalry with January, and his book, The Revelatories was a New York Times Bestseller that beat out our dear January’s book—a story in which no character has ever gotten a happily ever after. He’s handsome, mysterious, and he leans against walls repeatedly in a simply beautiful metaphor you’ll have to read the book to learn about.

Oh, and if I haven’t mentioned this already, he holds my heart.

Now, January’s life has fallen apart, and she is struggling to find a way to write happily ever after’s when her life has dished out nothing but awful endings. Augustus is stuck in a rut as well and finds himself desperately wishing he could believe in happily ever after’s. Needless to say, both are ridden with an awful case of writer’s block and strike a deal. January will write a story without a happy ending, and Augustus will write a story with a happy ending. Whoever sells the book first wins—and January promises she will not fall in love with Augustus while doing so.

Augustus takes her to meet with survivors and victims of a suicide cult called New Eden for book research, while January takes Augustus to carnivals and a slew of Meg Ryan movies, determined to show him that there is such thing as Happily Ever After. Of course, you can see how suicide cults and Meg Ryan movies will lead them to fall head over heels for one another, but there’s still the whole rivalry they must confront. This romance was a beautiful slow-burn that had me gripped from start to end. The characters had wonderful chemistry, and it never felt forced. And the banter… the banter is just the best thing ever. They’re two opposites and their attraction is magnetic. Magnetic, I tell you, magnetic.

I loved this book from start to finish. The characters felt alive, Emily Henry’s voice is a godsend, and the setting was vibrant and fun. Even the side characters—Pete and Maggie, and their Labradors—were so well thought out and vivid. There was more depth to the story than just romance. It was an examination of life and whether Happily Ever After truly happens for people. It was a tale of light and darkness, a tale of hope, and most importantly, a reminder that love conquers all.

Beach Read by Emily Henry was my Book of the Month in April (HERE is my referral code, if you are interested in joining this awesome program; I do get something when you use my affiliate link) . Needless to say, it was everything I needed this month and more.